In this 2008 short documentary, four friends travel half way across the word in search of an elusive piece of art by world renowned artist, Banksy.  In the process, learning more about themselves and the precarious relationship the people of the region have formed. 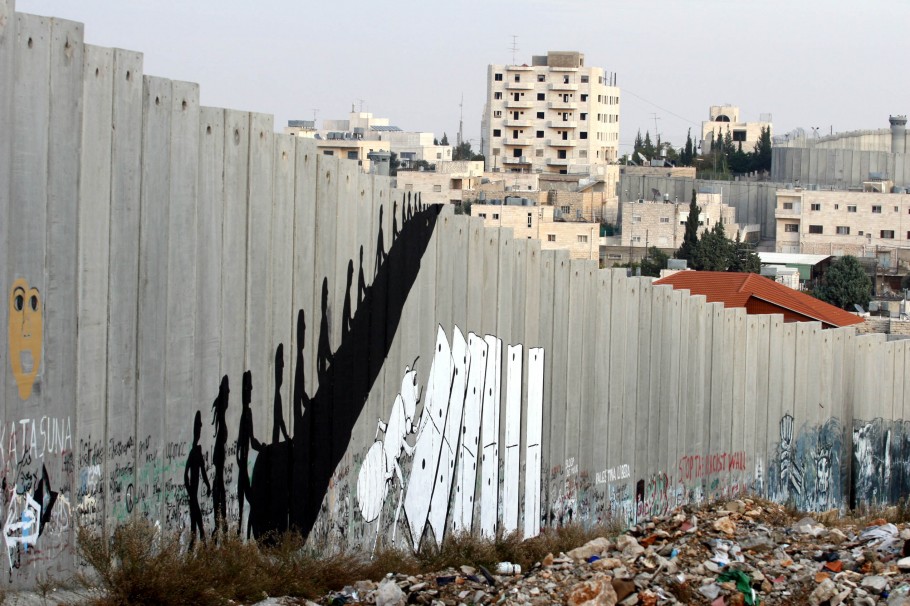 British graffiti artist Banksy has launched an art exhibition in Bethlehem that he hopes will focus attention on the poverty of the West Bank and draw tourists to the traditional birthplace of Christianity.

As part of the project, Banksy has adorned the controversial security barrier around the West Bank town with spray paint and plaster works of art in a comment on the Israel-Palestinian conflict.

Israel says the purpose of the barrier is to prevent terrorist attacks being launched from the West Bank. Palestinian leaders however say the barrier amounts to an illegitimate land grab by Israelis, setting unilateral borders for an eventual Palestinian state.

The new exhibition, called “Santa’s Ghetto Bethlehem 2007,” is a collaboration by artists who say they are trying to revitalize tourism to Bethlehem and “offer the ink-stained hand of friendship to ordinary people in an extraordinary situation.”

Banksy’s sketches on the security barrier flow towards Manger Square, across from the Church of the Nativity, where Christians believe Jesus was born.

His images include a dove wearing a bullet-proof vest, a young girl in a frilly pink dress frisking a soldier and a donkey being checked for its identity papers.

According to the Web site for Santa’s Ghetto, Banksy thought he was making an ironic commentary with the donkey picture, but locals told him the animals are frequently asked for ID papers.

Santa’s Ghetto typically operates during the month of December out of a small store on Oxford Street in London, where underground artists showcase their work.

Banksy, who started the initiative six years ago, says: “I felt the spirit of Christmas was being lost. It was becoming increasingly uncommercialized and more and more to do with religion, so we decided to open our own shop and sell pointless stuff you didn’t need.”

His exhibition in Bethlehem is rife with the same satirical sentiments. Beyond the barrier graffiti, the work of Santa’s Ghetto’s diverse artists spread across three floors of a building in Manger Square.

Inside, examples include a painting by Palestinian artist Suleiman Mansour in which a man carries the city of Jerusalem on his back, and London artist Peter Kennard’s montage of dollar bills printed on pages from the Jerusalem Post. Proceeds from Santa’s Ghetto sales go to charity.